In 2019 we have seen the Beta version of the eagily anticipated iRobot Terra robotic lawn mower. Whilst there has not been much information about the iRobot Terra mower, earlier this month iRobot had contacted the Verge to say that Terra’s beta machine is ‘progressing as planned’ and that iRobot expects it to be commercially available in the US from 2020, exact date still to be confirmed but I would imagine it would make sense to release it prior to the Spring mowering season. 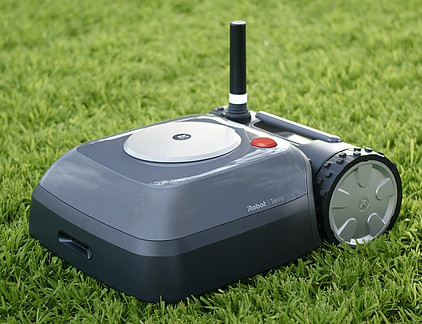 Although the pricing of the iRobot has not yet been revealed, it has been suggested that it will sit at the competitive range of the market – between $1,000 to £3,500.

As this machine will be at the top end of the market, it has been confirmed by the Verge how iRobot can differentiate the Terra brand from other popular brands. It has been suggested that the iRobot Terra will have twin blades, that will “micro-mulch’ – similar to general mulching we have already seen in other products such as the Worx Landroid.

This type of mulching simply obliterates the grass and deposits the clippings back into the lawn, thus improving the health of the lawn and leaving no mess for user or grass box to empty.

One of the most important factors is the Terra’s ease of use over other competitors, with a simplified setup process. iRobot has invested heavily to develop a wireless beacon system, which is unique to the iRobot Terra range. This system enables Terra to navigate complex lawns, without requiring the need for a boundary wire, as used by many other brands on the market today.

The wireless beacons are placed around the lawn or yard, and the iRobot will then train its course by driving once around the perimeter. Once it has ‘learned’ the layout of the lawn, a schedule can then be setup along with other features and modes. Early indications would suggest that the wireless beacons must be professionally installed, but this is yet to be confirmed.

The iRobot Terra has built in anti theft software which renders the device inoperable if it is placed on a lawn for which it has not been mapped. This another clear advantage of the new wireless beacon system. And just like other Robotic Lawn Mowers, there will be a security PIN system which prevents the device from being accessed, or reset to factory settings.

The iRobot Terra is said to boast an IP55 rated enclosure, which means it will be able to withstand most weather conditions, although iRobot themselves have advised that during harsh winter months, the mower and its beacons are stored inside to minimize any potential damage to the device.

As the iRobot Terra Robotic Lawn Mower is currently in Beta and not yet fully released into the market, it is difficult to form an opinion of this device. However, if indications are to be believed, then certainly the potential features mentioned above and it’s ease of use will no doubt make this an attractive product, and one that has significant advantages over its competitors.